Aung San Suu Kyi is known first and foremost as the political opposition leader whose pro-democracy work earned her the Nobel peace prize finally presented this year but few until last night realised there was a strong local family connection.

The late Michael Aris married Aung San Suu Kyi after they met while studying at Oxford and his sister Lucinda Phillips (left) organised the showing of the film 'Lady of No Fear' at the Athenaum as part of the Warminster Festival. 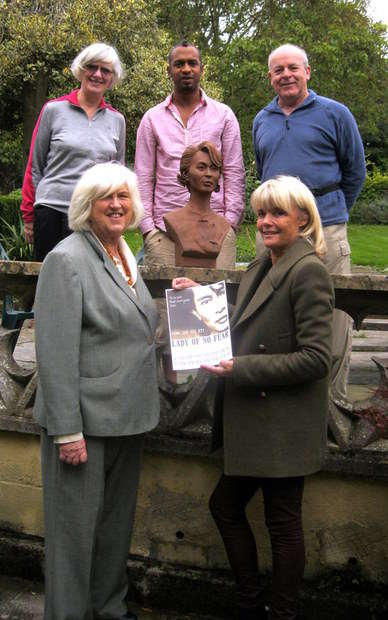 The story of Suu Kyi and Michael inspired Danish film maker Anne-Gyrithe Bonne to add it to her 'must do' films but at the time it was fraught with difficulties.

"Suu was under house arrest and I met Desmond Tutu so did something about him but my mind kept coming back to her," Anne-Gyrithe told Paul Macdonald in an exclusive interview after flying over from Denmark.

There were interviews with people who knew her but she was under house arrest and because the garden outside had become so overgrown it was full of snakes so Suu could not even be seen there.

"I had to drive past her house but it did feel very dangerous," added Anne-Gyrithe (pictured right).

"Then I took the decision not to do it about the politics but to concentrate on the story of Suu and Michael.

"I have never met her. I wrote a letter to her but Lucinda was too concerned about the authorities so it was not delivered."

The film was released in 2010. It has won awards at 14 film festivals across the world so far. The showing of the film at the Athenaeum.

"The story of Suu and Michael will never be out of date," said Anne-Gyrithe. "It is a story of her strong love of Michael, her 'knight in shining armour', her private life giving up a normal marriage for the cause of freedom in Burma."

"The story of Suu and Michael will never be out of date!"

"I met Suu and Michael several times in the eighties and nineties and was so inspired by them," adds Paul Macdonald. "Suu knew if she returned to Burma what would happen.

"This is such a poignant story because Michael died on his 53rd birthday in 1999 still unable to see his wife."

*Pictured Joining Lucinda and Anne-Gyrithe around the treasured bust of Suu Kyi are Bernie and Judith O'Shea who had flown in from Australia to see the film and Julian Phillips.