THE massive cuts facing the police service are now hitting close to home as it was revealed on Monday evening that the town's last remaining senior officer is being withdrawn.

Inspector Alan Webb, who has served here for two years, is being returned to police HQ to fill a gap there but his impending departure will leave a gap here.

When town councillors enquired about his replacement he said that he was unable to name one as nobody has been appointed.

He said: "An inspectors' restructure is now under way and I'm not surehow it is going to pan out."

Local councillor Steve Dancey said: "If it means Warminster is being robbed of its last senior officer it would be a great shame but we shouldn't be surprised.

"We alway lose out when cuts are made - perhaps we should make more of a fuss.

"The policing manpower in Warminster is now a just a shadow of what we used to enjoy in the early 1980s when we had nearly 40 officers based here."

Councillors praised Inspector Webb for his regular attendance and helpful attitude and wished him well in his new role.

Inspector Webb attended the meeting to present his last briefing paper to the town council.. 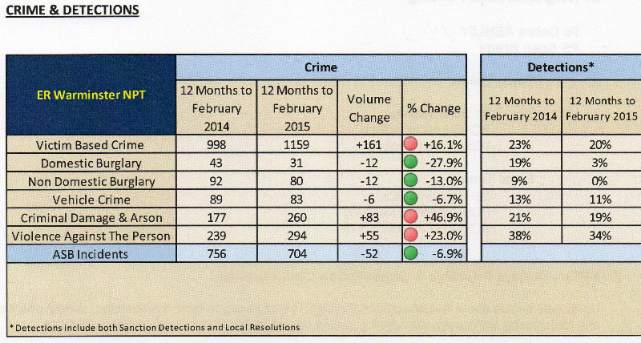 Asked by Cllr. Paul Macdonald, whose ward includes the town centre, for the reasons why the amount of criminal damage had 'shot up by almost fifty per cent' in the last 12 months.

"Inspector Webb was unequivocal in his reply. It was in his view late at night as a result of those on their way home from the town centre," said Paul.

"It is why I always question the wisdom of granting licences that allow drinking into so many of the early hours of the morning when we as a town are consulted by the county council.