WARMINSTER businessman Pete Bartley was so concerned at Wiltshire Council's failure to clear dangerous, slippery leaves from a busy town centre street that he decided to pick up a shovel and do the work himself.

Mr Bartley, who is joint owner of Prestbury Sports Bar, said: "Of course I'd like the council to clear rubbish from the road near my premises but this issue goes further than that - it is a health and safety matter. 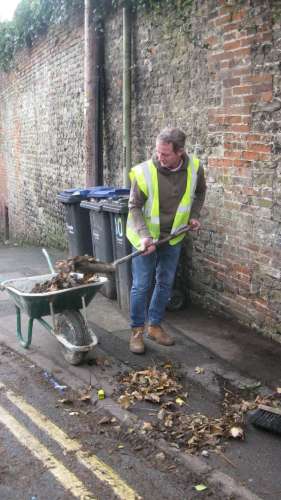 "The pavement has been slippery for months and I've not seen it as bad in the past 10 years.

"There's lots of elderly people living nearby at Kyngeston Court and they have to walk through the mess or on to the road to avoid it. Others I know are partially sighted and they find it particularly tricky."

Mr Bartley (pictured right) was joined by town councillor Paul Macdonald who stepped in to assist after being contacted by the business owner.

Paul said: "I responded to a call from a business owner in The Close worried about the elderly and infirm people forced into the road at its narrowest point when parked cars are taken into account. 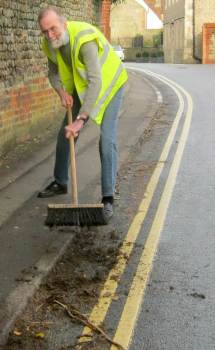 "After looking at it with Pete I explained that I could report this using the county council system which sometimes takes days and often takes weeks to work its way through to front line county council staff.

"We agreed not to wait and do it ourselves."

The work to clear this part of The Close took about 30 minutes and was applauded by several people passing by including Kyngeston Court resident Pearl Williams.

Pearl said: "I've lived here for years and it is the first time I have ever seen it cleared up.

"I walk in the road because of this, the bins and the pavement slopes. We have reported this to the council in the past."

Just over four wheelbarrow loads of mulch and litter were collected and put into the commercial wheelie bin at the Prestbury Sportsbar.

Town councillor Steve Dancey believes Warminster town is missing out and that workers are directed to the villages to undertake work.

He said: "While I applaud Mr Bartley's public spirited action in The Close, he can't do all of the town.

"That should be Wiltshire Council's task and if you visit Bartholomew Walk, The Avenue and Boreham Road you will see areas where this malevolent mulch has been left to rot for months without any action from the council's contractors.

"However had you been out and about in Heytesbury's Park Street or in Chitterne in the autumn you would have seen a team of contractors working hard to remove leaves in these areas.

"The areas left to suffer in Warminster are highly trafficked by pedestrians, often old and infirm, while many lanes in the villages are used by the odd dog walker in wellies.

"Our residents pay the lion's share of council tax and business rates and we deserve a better deal.

* See 'You Say We Say' for a comment froma former mayor