WILTSHIRE'S Vote Leave campaign was launched in Warminster on Thursday evening with a sparkling mix of euro scepticism and humour at a packed Athenaeum. 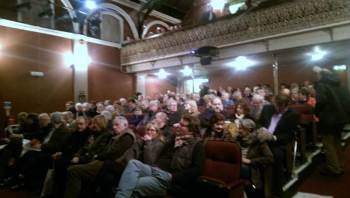 Topping the bill was long serving Conservative MEP Daniel Hannan who spoke unscripted following the warm-up acts of local county councillor Christopher Newbury and MP Andrew Murrison - who only 'came out' for leave this week.

Mr Hannan, clearly as erudite and persuasive as UKIP's Nigel Farage, but without the baggage, delivered his message with skill and charm and began with a couple of good jokes. (more of those later)

His central message was that Britain would be better off by uncoupling from a declining Europe and hitching up with the economies of the world's other continents - all of which are expanding in GDP terms.

New technology, he assured, meant that geographical proximity counted for less these days but a shared language, accounting and legal system of common law were ever more important.

"Not one of those things is found in the single market while geographical proximity has never mattered less," he said.

"When we joined the Common Market it was at our lowest point as a nation, the worst time in the mid 1970s and we looked across the Channel and thought they have got things right, so we have better hitch our wagon the that locomotive.

"Does it look that way now?"

Not according to the official statistics which show that in 1980 the 28 countries that now make up the EU accounted for 30 per cent of World GDP and in 2013 only accounted for 17 per cent.

Of course this is in part  a reflection of the rapid expansion of the so called Less Developed Economies which in turn has reduced the importance of the European market to Britain in recent years.

In 2006, 56 per cent of UK exports were destined for the EU but today that figure is just 44 per cent and continues to fall - though we suck in far more in imports from the EU.

Mr Hannan was sure that following Brexit Britain would continue to have access to the single market in much the same was as every country in Continent Europe does - apart from Russia and Belarus.

He described those fighting the change were scaremongers peddling dubious facts and figures and demolished many of their arguments.

The EU is profoundly anti-democratic as the experience of Greece and Italy have shown in the past year.

He said: "Public opinion is treated as an obstacle to be overcome and not a reason to change direction - elections change nothing.

"How can we happy to have a system led by people nobody voted for?"

In fact, he said, people only seem to become EU leaders after they have lost elections eg Juncker.

The recent experience of David Cameron expending huge amounts of effort and achieving so little during his negotiation shows how intent the EU leaders are on reaching their destination of a United States of Europe.

"When their second largest economy is considering whether to leave they still cannot bring themselves to make any change, "he said.

"I want 23 June to be our Independence Day when we become a free and prosperous nation with its own laws.

"We need to bring back the right to rule ourselves - at the moment the EU has precedence over the nation state."

Steve Dancey adds: " This was a very polished performance from no notes and Mr Hannam, who educated in Wiltshire at Marlborough College, gave succinct and logical answers to the 10 public questions.

(These included one from a concerned farmer and another from the contingent of Warminster School pupils studying economics).

"Leave campaigners may not have the money and corporate backing of the Remain group, which will obviously huge resources from big business, EU largesse and the UK government, but it does have the enthusiasm and support of significant numbers of people who are appalled at the way the EU rides roughshod over our democratic government - and others on the continent.

"While in some ways it is a shame there is more than one leave campaign in other ways it could play to their advantage. Those attending the meeting at The Atheneum (around 200 people) were largely well to do, educated and drawn from the more professional groups. They probably find Nigel Farage a bit of a turn off.

"But we must remember that if it wasn't for Nigel we wouldn't be having this vote. His appeal and function must surely be  focused on ensuring the 5 million or so diehard UKIP contingent turn out on 23 June."

Independent town councillor Nick Dombkowski said: "Firstly, it was a great turn out and secondly, it was a well organised event.

"The talk from the MEP was fair and far from being Anti European. I think the message is clear to remain where we are signals a green light for the EU to continue to walk all over us and rubber stamp its undemocratic directives on everything we do as a nation.

"There is no bargaining chip or deals to be done with Brussels. What they say goes every time. The Remain argument that we cannot free trade as we are and the notion leaving the EU will threaten 3 million jobs he demolished as just pure scaremongering.

"I now have joined the Leave campaign after tonight."

AND NOW THE JOKES

EURO MEPs almost never get contacted by constituents because they have a very very low profile and nobody knows who they are. Amazingly one contacted Mr Hannan to moan about the state of the drains in his area.

Mr Hannan listened and said it wasn't his area of expertise but why not contact the local environmental health officer at the council and here is the number.

On a visit to a farmer in Hampshire Mr H was told about a how an expensive pedigree bull had been purchased but had not performing his duties. However some new pills had been found and now all the cows were in calf as the bull had done his job.

Mr Hannam enquired about the name of the new product.

Farmer replied : "I don't recall, but I can tell you they tasted of aniseed."

Mr H has been amazed at the huge sums of money lavished on Euro MPS - not just salaries but massive tax free expenses and huge allowances to pay for offices, secretaries, aides, press officers - still leaving a lot of money to pay members of the family such as wives in various capacities.

He has frequently voiced his concerns over expenses to MEPs from other nations who revealed this chilling observation 'What is it about you British? You employ your wives and sleep with your staff!'