During elections Independent candidate Paul Macdonald always enjoy some of the observations from our residents as he goes around campaigning.

"How much are county councillors in Warminster paid?" I was asked explains Paul.

"I said I could not give an exact figure but I suppose about £250,000 over the last four years. 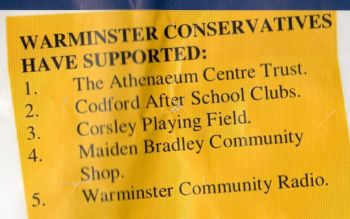 thrust a Tory leaflet promoting Paul's rival for the county seat into his hand.

"Is that the top five things they Tories have 'expletive' done for us? The Athenaeum and Warminster Community Radio and the rest outside of our town," he said

"I said it was an example of a centrally produced party political leaflet and handed him my leaflet,"adds.

"Independents get my vote,' he said.