Warminster Should Remember the Fallen of WW1 in a Special Way

The 2018 Remembrance Day parade should have a brand new approach with an extra special effort to mark the end of the First World War is the call of a Warminster Town Councillor.

"We have nine months to show our special appreciation for this once in a hundred year anniversary for our town that now has such a strong heritage with our soldiers of all ranks," said Cllr. Paul Macdonald.

Warminster is now internationally renowned for the 'waterfall' of kmtted poppies showing its support for the annual Royal British Legion appeal.

"I have asked that this rather special moment in the history of the town be put back on the agenda at a town council meeting on Monday in two weeks time," explained Paul

"I will be again be putting forward the idea that our town this time working with our local villages produce an everlasting monument to those that gave their lives during that conflict that is described as 'the war to end all wars',"

"We should ask the public to come forward with their ideas."

Two local villages have graveyards dedicated to soldiers from Australia and New Zealand and other villages played a big part in the war effort by British soldiers. 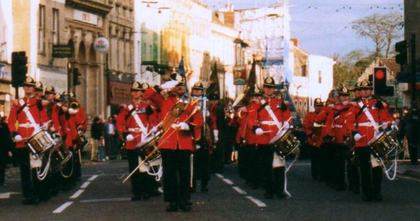 The First World War conflict has a memorial in the Portway which features the names of local families that lost relatives in battles during that war.

"We as a town council have a special responsibility in November this year to show our recognition for the sacrifices made one hundred years ago working with those that serve our country today from their homes in our town," added Paul

The Independent town councillor will also be asking  a new question of fellow members.

"If we can generate enough support for this among all of us that live, work. and run businesses in our town then I think we can have something to be proud of and show to our children and grandchildren," added Paul.

The town council will also be asked to consider the timing of the Remembrance Day parade and ceremony at the monument.