An ecologically friendly movement that began six years ago in the market town of Chipping Sodbury is coming to Warminster in a positive way as the town council has agreed to take up the ‘Blue Heart Campaign’ using ‘marginal’ town land that is not needed for recreational purposes.

The campaign pushes the message that re-wilding of gardens, parks, roadside verges and schools is needed to reverse the dramatic decline in biodiversity across the UK.

At a climate change forum earlier in the year re-wilding was a favourite first step.

Councillors meeting via internet links on Monday agreed to co-opt an enthusiastic proponent of the ecological project after hearing about the benefits that can be achieved.

“I have spoken to the town council previously about the Blue Campaign and the benefits of re-wilding,” said Amelia al Eppis pointing out the money that would also be saved and increased biodiversity. 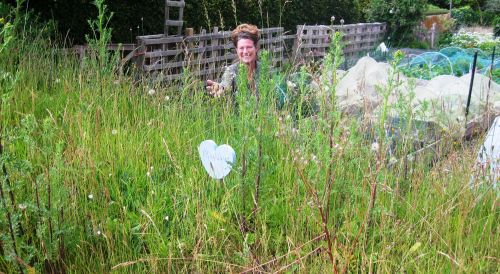 “A number of people have commented how much they enjoyed seeing the uncut verges and grassy areas during lockdown.

“We know that Warminster town council has been asked by county to identify areas currently maintained nine times a year to three.” added Amelia.

Recreational areas are not part of the plan only marginal land councillors were assured.

The Blue campaign, which provides a blue heart sign to show which are re-wilding areas because they stand out better against their backgrounds, will help with public perceptions.

“I have experience of re-wilding professionally which hopefully will be of help,” said Amelia offering to servive as a co-opted member of an environmental working group be set up that evening.

“I would recommend asking Wilts. Wildlife Trust to join as well.”.