The custodian of the town library is thrilled at the success of emerging from the pandemic opening its doors safely last week.

Scores upon scores of traditional bookworms and modern internet users joined by others accessing information flocked to the first day of the re-opening of Warminster Library.

The doors on Tuesday last week were unlocked since pandemic lockdown was imposed to keep the public and staff safe.

Librarian John Garland, looking like a character from one of the science fiction books on shelves inside, clicked away at the counter hanging from his neck recording the footfall.

John had only been in post for a few months at the town library that also serves as a focal point for many villages down the Wylye Valley when the order to close arrived on his desk.

The first three hour session just over a week ago opened at 10 am and as the doors were being closed for a lunch break at 1pm over 100 visitors had turned up.

Warminster is just one of three more libraries open to the public in Wiltshire following the largest three resuming their roles in the community. 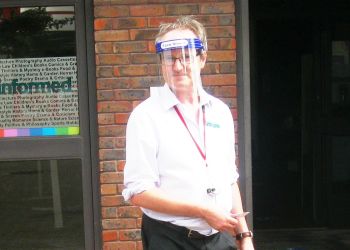 “After being closed to the public for so long the library got the go ahead to open after an overwhelming response from customers,” said John. “Thank you so much to everyone who completed a consultation form!

“We’re thrilled to be open again and look forward to seeing you all again in person.

“The library is now open on Tuesdays and Saturdays 10am-1pm then 2pm – 4pm. You can visit the library for up to thirty minutes, but computers need to be booked in advance where possible.

“Up to 40 people can visit the library at a time, with up to six people allowed in the children’s library.” 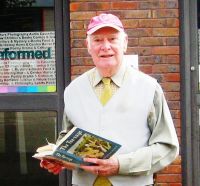 He called on everyone in Warminster to let Wiltshire Council know that it should be re-opened.

”Good news!” said Terry Cross. “The library is back on tap. I popped in yesterday to experience its re-opening.

“It was rather futuristic with the shielded desk and library workers in their face shields.

“Everyone was most welcoming with smiles and greeting as for long lost friends.

“Also what has become the norm now - the arrowed walkways!”

The result of a public consultation that saw hundreds of local residents rocketed the service ideally located at one of the two entrances to the Three Horseshoes Walk to the top of the list to open quickly.

“The library is now open on Tuesdays and Saturdays 10am-1pm then 2pm – 4pm,” added John Garland.

“For the time being our Rhyme times will remain on Facebook, with the advantage that you can watch them with your children at a time that suits you.

“Just like shops masks are now mandatory unless you have a health condition, we are also collecting contact details for test and trace which will be destroyed after 21 days.”

The Warminster Librarian is now busy behind the scenes passing on the success of re-opening the town library helping to get the next set of libraries open.