Warminster residents are being urged to sign a national petition that would strengthen the public saying no to building on important green fields.

Wiltshire Council are being bombarded with signatures to their version of this public involvement, and letters of objection, to a planning application at Damask Way.

The 'Prioritise brownfield development in law to protect our green belt and farmland' petition is the first step in the right direction," said Cllr. Paul Macdonald.

It calls on the government to 'enshrine in law all brown field sites to be fully developed within a 25 mile radius of green belt or farmland before any development is allowed on non-brownfield land.

'Ensure in law the democratic wishes of local residents and local authorities as a precedent and limit ministerial powers to suit.

'The Government has a duty to protect the environment against climate change, protect local areas of outstanding beauty and natural habitat.

'Preserve todays biodiversity and bio abundance for the generation of tomorrow.' 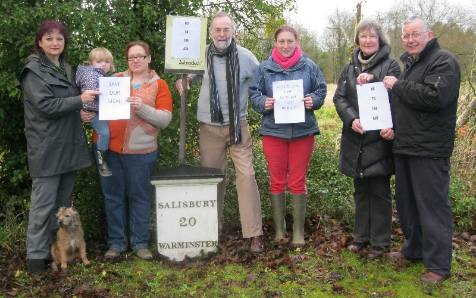 The petition needs 100,000 signatures to get it onto the agenda of MPs to discuss in the House of Commons. So far it has been signed by over 10,000.

"It is the next words in the petition that really struck a chord with me bearing in mind the huge public opposition in our home town to housing proposals at Damask Way and Grovelands Way," added Paul.

"This is so true and has my support," said Cllr. John Syme. "I wrote a letter to the Warminster Journal very much along these lines just last week."

Councillor Stacie Allensby, who is pictured campaigning long before becoming a councillor to save an important ecological area alongside the River Wylye, is busy with a planning application in a wildlife area.