'Tyred' and Tired Out Council

Potholes and bad road surfaces are a danger to all road users which Wiltshire Council always claims they are spending record sums on.

The state of a very busy short stretch of road in Warminster is now so bad a councillor has put it to the top of his ’to do’ list this week.

“Election promises are all well and good but will they materialise in black and white along Imber Road,” said Cllr. Paul Macdonald.

“Tyred out and tired out black bitumen and white lining!”

“The town council can put forward to Wiltshire Council a request that something is done about this through a meeting of the Community Area Transport Group but that takes too long. 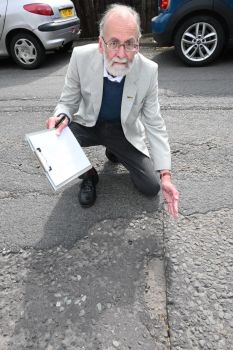 “I still intend to do this and I have spoken to county councillor Andrew Davis who has agreed that we work together on this.”

Wiltshire Council are the highways authority which prioritises repair and resurfacing work and rejected councillor Macdonald’s request to take an urgent look at the surface between the Fairfield Road and East Street Junctions.

“I know that it is on their radar in Trowbridge but it took years to get the Boreham Road surface done,” explained Cllr. Davis in his chat with his fellow ward councillor last weekend.

Cllr. Davis responded to a reminder e-mail from Paul and rattled off a request to highways engineers at county hall to take a look at the ‘de-lamination’ that the road surface is suffering.

“A local resident told me it had been made worse by more and more HGVs using the road,” said Cllr. Macdonald.

“In the meantime I will be requesting that uneven road surface signs are put up, The surface there is not only uneven though.

"It has potholes, grooves which the parked cars on one side will  force out unaware motorcyclists and cyclists forced into them.

Eight residents joined the Independent twon councillor at a site meeting this week and others responded by e-mail adding more to his 'to do' list.

“Once the surface is repaired we will then need to look at the longer term issues.”