(August 17, 2021)
The centuries old Feoffees of a 13th century chapel and the future new owner of a neighbouring much complained about derelict building which is a major eyesore in the centre of the market town of Warminster are working together to deal with it. 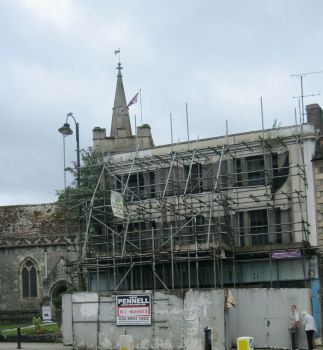 Scaffolding has blighted the High Street for a decade and was the scene of a tragic death of a popular local young man in the early hours of a Sunday morning four years ago.

The former shop that in years gone by has served as a men’s outfitters and was last used as a charity shop is now prevented from collapsing into the road by the scaffolding.

“The redevelopment of number three the High Street has been a priority for the Feoffees and the town for many years,” said their vice-chairman Ian Frostick at a presentation to the town council this week.

“In 2019 we were approached by Robert Gamlen, He presented us with a detailed proposal to purchase and develop the site.

The chapel own Curfew cottage that sits at the end of the narrow path which they rent out.

“In return we would receive a small parcel of land to protect its boundary.”

Councillors at the planning committee meeting heard that that the current tenant of the cottage has been offered alternative accommodation and when it empty will be refurbished.

“It has been a long and tricky process but with the co-operation of the Feoffees we now have got a scheme that can work for everyone’s benefit,” said director Robert Gamlen of Rosebray Developments who will shortly be the new owners.

“The site has consent to demolish the present structure and for the construction of six new houses with five two-bedroom flats and a shop.

“The demolition will mainly be carried out hand by hand,” explained Mr. Gamlen. “The demolition contractor reckons he will be on site for about five to six weeks.”

The new look to the removed eyesore will then begin starting at the back of the land and will take about twelve months to finish. There was also good news for those looking to buy their first home.

“We will be registering the scheme for Help to Buy which enables first time buyers to purchase with a five-per-cent deposit, a 20% interest free loan from the government for five years and then a 75% loan from lenders.”

“The most important thing to us now with this good news seems the scaffolding. A major blot on the landscape,” said Cllr. Paul Macdonald. “We thank you both for what you have put together here. We applaud you.”

“I move that we thank Mr. Frostick and Mr. Gamlen and we look forward to progress in the future,” said committee chairman Cllr. John Syme.

The Chapel of St. Lawrence was bought by the people of Warminster for the sum of thirty-eight pounds, six shillings and eight pence and so became a ‘peculiar’ no longer controlled by the Church of England.