Dispute Over The Wall

A tiny Warminster community have united in reaction to a request to Wiltshire planners to demolish a wall that was insisted on four years ago when a permission was given.

Fifteen of the sixteen households in Ridgeway Court which is tucked behind East Street have signed a petition delivered on Thursday objecting to the demolition of a wall that seperates them from Carson's Yard. 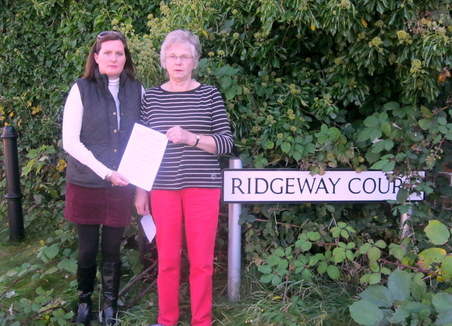 "We have so many concerns," explained resident Margaret Broughton. "This will create more traffic for an area that has no pavements and was never meant to be opened up in this way."

Currently there is only one route in for cars and one additional way in for those on foot.

The the town council have objected. The county councillor Andrew Davis has promised to 'call it in' to be discussed at committee, the MP is asking for more information.

Two former Mayors and a former deputy Mayor have backed the residents. Cllr. Paul Batchelor added his signature to the petition and May Law who lives at the entrance to Ridgeway Court wrote to Andrew Murrison MP.

Nearby resident Maya Fox talked about the original developer of Ridgeway Court wanting their homes to be part of bigger scheme.

"If he was refused permission to have access to Carson's Yard then why should that now be allowed if not then," said Maya Fox.

Another resident argued that the name Court meant that is was not meant to be anything more than a no through road agreeing with Maya addding that Ridgeway Court would never have been allowed without the wall.

"It will not be a quiet cul-de-sac," continued Maragaret. "It will be another rat run for late night revellers.

"It will create more traffic and with children now growing up here with small gardens and they are going to want to play outside."

The residents concerns have been caused after the developers of a block of flats nearly completed in Carson's Yard decided to seek a change to the permission that was given four years ago that took into account the insistence that the wall could not be removed.