STEVE Dancey, the former county councillor for Warminster West, writing to the Warminster Journal, has issued a rallying call for enough to be enough of the 'six of the best' that has been meted out on his home town by the Tory town council. 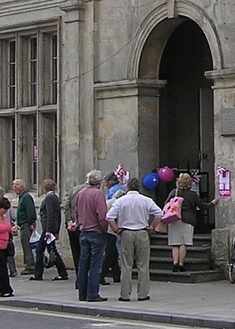 'Like many Warminster people I’m not very keen on using or even entering the so-called civic centre but feeling the occasional need to keep a beady eye on our esteemed town councillors I have twice overcome my reluctance,' Steve writes.

'Once inside you can’t help wondering where all the money was spent – clearly the accountants have been more creative than the designers or architects!

Listening to the debates I couldn’t quite believe my ears.

On the first occasion nobody seemed sure whether new CCTV cameras would be digital or analogue while last week there seemed little understanding of the Localism Act on display.

To suggest that asking for the Town Hall to be listed as a community asset as part of ‘community right to bid’ would commit the town council to purchasing the building is nonsense.

Why Are We Waiting?

'What the debate showed very clearly was how little goodwill there is from the town council towards the Town Hall,' continues Steve.

'Had this group of people been more constructive over the past six years and not looked under stones for reasons why they couldn’t help, we wouldn’t have been left with this empty edifice on the centre of the town.

My aspirations for Warminster are greater than allowing the town’s most significant building be converted into flats. Shame on those who suggested this.

Fortunately, after six long years that have dragged on, the town will have an opportunity in May to remove the negativity and put us on the right track but only if enough people come forward to confront the status quo,' concluded Steve in the correspondence published in the Warminster Journal.

*The town council will have to submit itself to a public vote at the local elections on Thursday 2nd May which will be binding unlike the result of the controversial Assembly Hall 'mega-loan parish poll' which sawthe promise of a Mayor to accept it then ignored.