Pressure is mounting on town councillors to explain why the survival of the Warminster Information Centre opened by a Princess Royal is now in question after a front page report in the local 'paper of record'.

The Warminster Journal wrote last week: 'Despite speculation that Warminster's Information Centre is to close by the end of the year, the Journal was not able to confirm this would be the case by the time the paper went to press.'

A letter the previous week had awakened the editors of the newspaper that a story worth pursuing gave spokesman Michael Mounde the chance to respond with the words 'more consultation and discussion is required.'

"I have been stopped so many times this weekend about this issue," says town councillor Paul Macdonald.

"I am really not enjoying saying that we the town council have little involvement with the running of this nor the decisions taken about it that I am aware of.

"Graham, a resident asked me to get in touch with Princess Anne to ask her about the idea as he could remember being there when she opened it. He reminded me that I was there as well!"

The building stands as a testament to the hard work of former West Wiltshire district councillors.

Who Holds the Key? 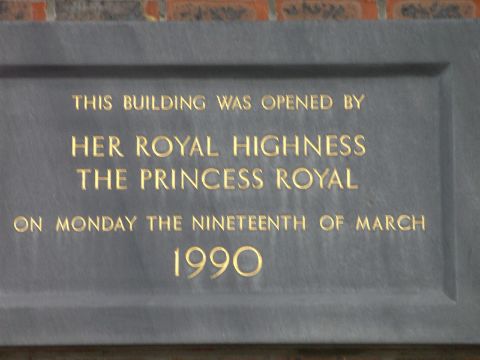 "There is a local body called the Warminster and Villages Development Trust (WVDT) that is somehow now a part of the Wiltshire Council wider scheme of things," says Paul.

"The town council no longer have elected councillor trustees on this development trust although I have in writing that a co-opted member of the town development committee, Anthony James Nicklin, is one of 'four current' directors after a website search."

Regular newspaper articles since have cast its future in doubt.

"Who holds the key is now the question to saving this building," argues Paul.

"The Citizens Advice Bureau threatened, Shopmobility slowly winds down, a name change from TIC to WIC now under threat.

"The recent positive news of a new user Cornerstone, due in part to the hard work of Independent ward councillor Nick Dombkowski, and local churchgoers.

"All this springs to mind amongst those that stopped me over the last few days," added Paul.

"I am not ducking the issue but these are the people who should be approached about the future of the Warminster Information Centre," says Paul.

"I have pointed the finger at them. If I am am wrong then come back to me and I will look into this further."

Wiltshire councillor Keith Humphries, who commented in the Warminster Journal article about the speculation, was briefly for six months one of two company secretaries of the Trust since it was set up in 2008, leaving the role to fellow Wiltshire councillor Ms Mary Fleur De Rhe' Philipe today.