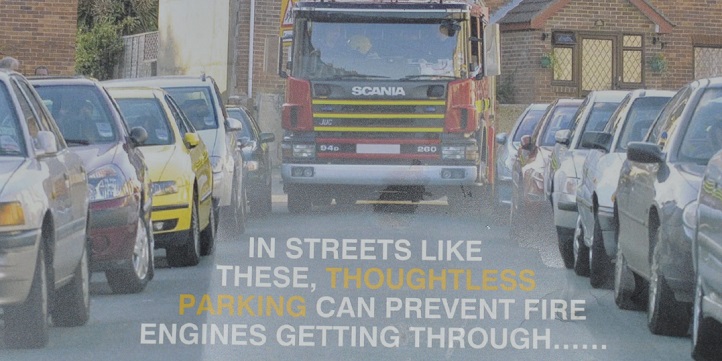 AN IMPORTANT fire brigade campaign being waged to improve public safety is being undermined in Warminster - and probably elsewhere in Wiltshire - by Wiltshire Council's policy of mismanaging its car parks.

Fire crews are finding it increasingly hard to squeeze their huge vehicles between massed ranks of parked cars on our public streets and, in a new leaflet distributed at Warminster area board, claim that time wasted puts lives at risk.

But Wiltshire Council, which is supposed to be 'partnership working'

with the fire service, allows a major town centre car park to be 90 per cent empty as motorists use nearby streets to avoid daily parking fees. This causes much of the problem.

Councillor Steve Dancey, who lives in the town centre, said: "The fire service is right to raise awareness of this subject. When I lived in Newport, a cul-de-sac off Portway, it was sometimes hard to get a small Citroen out of the street because of the number of cars parked by people evading the charges.

"A fire engine would have been delayed significantly because of this problem - and I know of other streets where there is a similar situation in the town centre.

"Warminster's car parks should be free. They always were and were developed and paid for by the old Warinster UDC - a body my parents and grandparents paid their rates to in order to create these facilities.

"Now Wiltshire Council is mismanaging these facilities as it is charging more than the optimal rate for parking, which in small market towns in 2016 is zero.

"Despite not being very commercially aware even those who run Wiltshire must know of the need to set a price close to where the demand and supply curves for off street parking cross - it is straighforward economics. Or is there another reason?

"The thought has occurred to me that what the powers that be in Trowbridge really want is for the car park to be seen as underused by the public so that they can work in partnership with some property developer and milk millions as part of a major redevelopment. Who knows?

"With the county council lacking a chief executive and democracy being trampled over by minor Conservative politicians running a 'cabinet', public confidence in the body is shot to pieces.

"The Fire Service is still highly regarded however, so we should heed their campaign which urges us all to think before we park and remember - A FIRE ENGINE NEEDS TWO CAR WIDTHS TO FIT THROUGH!"