Independent film maker Angus MacFadyean is working on a project that he describes as a 'sense of your journey' about the issue of unconventional coal bed seam extraction that has hit the headlines in Wiltshire.

In Warminster the news that two licences have been granted locally has seen weekly meetings held including one yesterday at the Rose and Crown which was filmed by Angus.

"It was interesting to see that there people appeared there from all walks of life," said Angus who has come over from Kent for the week.

Angus has been filming in other county towns and is continuously looking for suggestions of scenes to record. 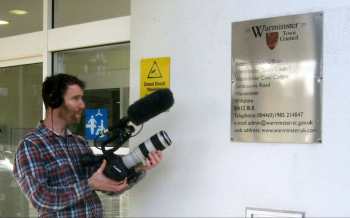 "It is good of you to agree to doing an interview with me today," he told Councillor Paul Macdonald as they walked to the town park to set up his camera.

"I have a slight problem that may delay this," he explained. "I have found that there is a lot of activity from those opposed to and concerned about fracking.

"However there seems to be no one coiming forward in public to support this.

"It is my intention for the production to include looking at this from all sides in an impartial way.

"It would be good if I could get the MPs to agree to be part of this, maybe someone from Longleat, locals with impartial knowledge of the geology, and those that support this as a solution.

"I can use the website that i co-author with Councillor Steve Dancey," replied Paul. "And ask them to let us known in our you say we say comment option.