Their connections with Warminster mean that we have around a tenth of all of Wiltshire’s historic buildings close by.
What  we can do as a community to build on these solid foundations is to enhance the look of the town making it more attractive to those who live here and to those who might want to invest here.
We already have things such as the hanging baskets, bulbs planted for springtime colour, a (very slowly) revamped town centre – and some smart new seats have made a welcome appearance in the High Street and Weymouth Street.
So what else could be done for maximum effect at minimum cost?
Boreham Road trees.
Those who have lived in the town for many years will recall that Boreham Road used to have many many more trees on its ‘sunny side’ than it does today. In springtime these produced a riot of blossom and in the summer they provided welcome shade.
Gradually the trees have withered away. Today very few remain.
We believe there should be a concerted plan to restore the beauty of this mile-long road so that all the trees that once graced this important entry highway into the town are reinstated.
If you walk along this road you can spot where the trees used to be by the patches of asphalt or even patches of earth where trees have been grubbed out most recently.

The trees used to stretch all the way from the Imber Road junction to Heronslade. Remarkably one tree, pictured left,  has been replaced at the Imber junction but we could do with another 20. Ideally the pavements should be wider to allow the free passage of wheelchair, pushchairs and prams. Boreham Road together with Bath Road offer the two most impressive entry routes into the town and we should do what we can to make them as attractive as possible.
In the town park we have skilled gardeners. Their talents should be put to use on the St. George's Field embankment that can be seen from the  first mini-roundabout as one enters the town at Boreham Crossroads.
We are not horticulturists but using suitably coloured flowers a message saying 'Welcome to Warminster' should be laid out.
And what about another portway to the town - the railway station. The front gardens of the police station and former police houses should be a colourful sight.
First impressions count so important visitors need to be enchanted early on and we need to enjoy our meanderings around the town.
The Avenue
Any potential investors coming to Warminster by rail would be invited to Dewey House but would have to thread their way through the rubbish strewn wasteland 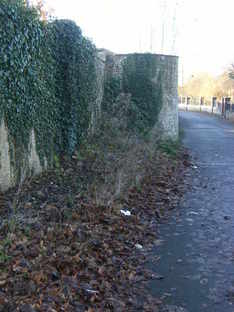 that is The Avenue.
As well as drink bottles, papers and supermarket carriers liberally strewn around the area there are long overgrown sections overwhelmed by brambles. This lack of care on the part of officialdom simply reinforces the likelyhood of litter being thrown.
The Avenue is badly in need of a makeover.
This area could be such an asset if it was looked after properly.
All that is needed is the will and co-operation of those with property along this route.
The Avenue School is exempt from any criticism as its front garden is exceptionally well-tended and its bluebells a delight in May.
Public Art
Many might shy away from this as an expensive frippery but we believe it could do much to raise the general feel of the town - and at very little cost.
While public art is expensive it is not always necessary to purchase it. We already know of an artistic enterprise - Project Workshop at Quarley near Amesbury - which has expressed a willingness to help communities display public art.

All that is needed are suitable areas.
We have identified two in the town which would be very suitable .
These are at the junction of Plants Green and East Street and at the junction of West Street and Pound Street. (pictured here)
Warminster needs to up its game in many respects and this could help and at little cost. The government, in its latest supplementary planning guidance note issued in October, has signalled that developers who can be asked to make provision for play areas, new schools and highways can now also provide public art .
We would also like to see a traditional red telephone box in the Market Place again.  Three red boxes used to compliment the post boxes at the Post Office. 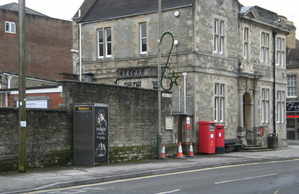 Why did our our town councillors show no interest in this when they were contacted by BT in September? These red boxes are part of our heritage and should not be allowed to diappear from historic locations.
And we would like to see more larger town centre events celebrating traditional things like harvest festivals using bunting and flags.
Town centre shop signs
Commercial companies have a vested interest in stamping their sometimes vulgar corporate identities on a shop front to entice people into the building.
These corporate identities do not sit easily with an historic Georgian high street and its listed buildings. We can all think of examples in Warminster which don’t fit in in the way that local shops such as Stiles, Kelseys, Gales and Wilson and Kennards used to and that Cordons and Coates and Parker do to this day.
In some other towns where the councils seem to set more store on conservation than we do the national chains are made to tone down their corporate identities in sensitive locations.
We need to take this approach in Warminster to enable us to maximise what we have.
Council officials need to be made aware of our views and made to enforce them - and embarrassed in public if they fail.
Local councils in this area have tended to be ‘officer led’ and this must change.
We also propose close public involvement with a town council sponsored series of competitions to get attractive signage ideas to put forward.
Keeping on top of basics
Street furniture is important to the look of the town. Everything from the state and availablity of bus shelters to the look of the pavements and kerbing leaves a lasting impression to those who visit.
The problem is all too often a gradual decline can creep up on us. As well as this an improvement in one area can suddenly show something that is lacking in another.
Imagine arriving in town and seeing people time after time huddled at a bus stop sodden waiting for the next service.
The town has most of the main Salisbury to Bath route buses well provided with up to date shelters but in the last few years the welcome arrival of the town routes means more are needed. It is time to get out the brochures once again and put this right.
Pavements eventually discolour with grime. The daily sweep up needs much stronger deep-cleaning from time to time.
The town car parks are in need of a community makeover as well. Look at the one serving the Assembly hall. How about taking away steel railings and making the barrier a hedgerow instead?
Boreham Road is just one that needs resurfacing as the carriageway around St George’s Church has been in a poor state for 15 years.
Finally, and most controversially.
It is a sad thing to say but with the exceptions of the two Salisbury Grammar Schools and St Augustines (and of course Warminster School) state schoolchildren in Wiltshire are possibly the most scruffy in the land.
Travel around the country south east north or west and it seems that the children in other counties are dressed in much more traditional uniforms than children here.
Again, the impression of a visitor can be tainted by this sight.
We need a debate on this subject as other places which used to have the this approach are abandoning the ‘sweat shirt lowest common dominator’ (so much loved of the powers that be in Wiltshire) for traditional uniforms.
Modern production methods also mean that shirts, collars, ties and blazers are far cheaper than they were a decade ago. Of course any monopoly supply will have to challenged. And the ties could be made by a local company.
In Andover, for example, two of the three schools, have opted to return to the blazer and tie. The headmasters say the children prefer it.
In Tidworth, which is about to get a £32million rural academy, a much smarter uniform is on the cards as well.
We all need to smarten up our act if we are to stay in the game.