THIS year marks the 25th anniversary of the opening of the Heytesbury bypass. Steve Dancey, who lived in the village for many years as a child and young adult looks back on the momentous event. Plus previously unpublished photos - captions below
In the 1970s and 1980s any reader of the Western Daily Press - and there were plenty of them in those days - was left in no doubt where they could find the most dangerous road in the west of England. The A36 between Bath and Salisbury.
The newspaper's highly imaginative district reporter, David Humphrey, had given the road the 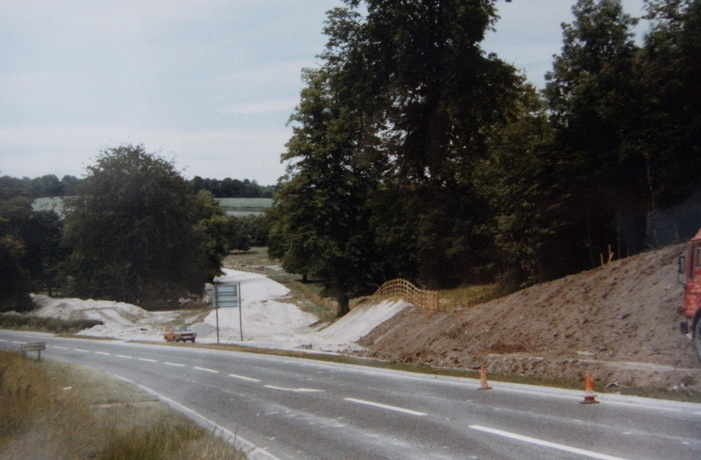 sobriquet 'Death Valley'.
The name stuck and with good reason, as the busy trunk road had many twisting and dangerous sections which had to accommodate a huge volume of heavy traffic, much of it generated by the Mendip quarries.
Such was the danger that accidents on the road touched many lives. My own father was one of the first on the scene in the late 1960s when a terrible accident at Skew Bridge claimed  a number of lives but several people were also rescued from vehicles.
Later, in the mid summer of 1979, four young people from Warminster, all from my year at school, plus a Heytesbury resident, all died in an accident at the Norton Bavant turning.
Such was the toll of death on this road that there was a concerted campaign for action for bypasses.
The call was answered, but only slowly.
The two most serious problem sections were tackled first in the 1970s with the opening of the 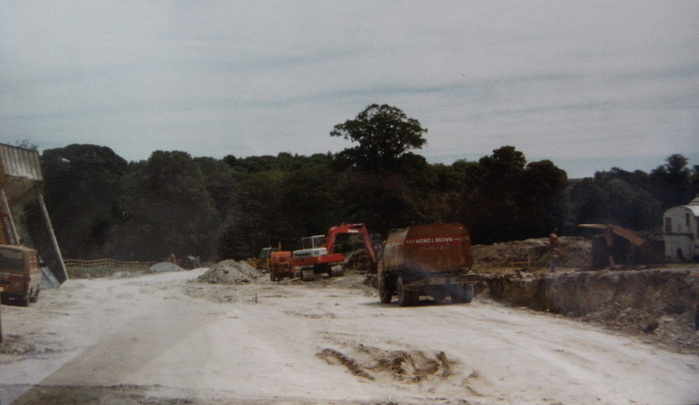 new, but still unsatisfactory Black Dog Hill, which replaced an unbelievably slow and twisting section of road (part of which still exists).
A couple of years later the A36 - A303 junction at Deptford had to be replaced. For many years traffic on these roads had to share one carriageway for a short section and with the A36 given priority massive tailbacks would build up on the A303 at the junction, while life in the village of Wylye was far from tranquil.
By 1976 this work was complete but the issue of the Warminster, Beckington, Heytesbury, Codford and Steeple Langford bypasses were still a long way from being settled, often because there was no agreement about a route.
In Heytesbury however the village had been capaigning for a bypass for some time.
The local council, led by the energetic Tony Bailey, who was also an official with Salisbury 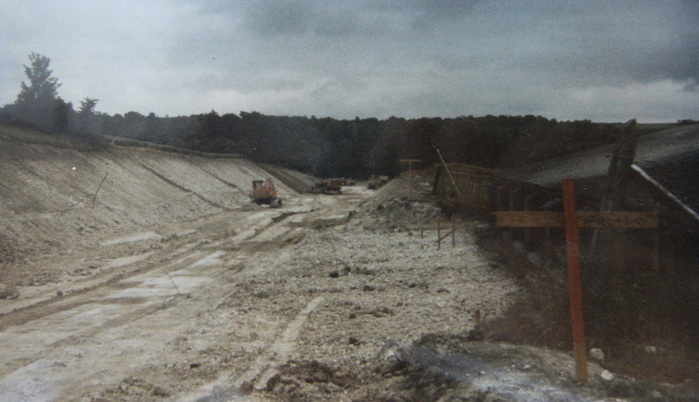 District Council until his death in the early 1990s, organised regular vehicle counts each year. Many were asked to help, including spotty teenagers like myself.
Heytesbury was rewarded by being the first of the new batch of village bypasses. Fittingly there is a bench in memory of Tony Bailey in a quiet position on the western edge of the village, though I wonder how many of the current villagers realise what an important role he played.
Diggers and earthmovers moved into the area early in 1986 with much time and effort spent building the new 'Cotley Hill' roundabout that would two years later funnel traffic onto the new A36 Warminster bypass.
The workers made short work of the project and within a few months the village was transformed.
Sadly the setting of Heytesbury House and the park was altered forever and the field where I 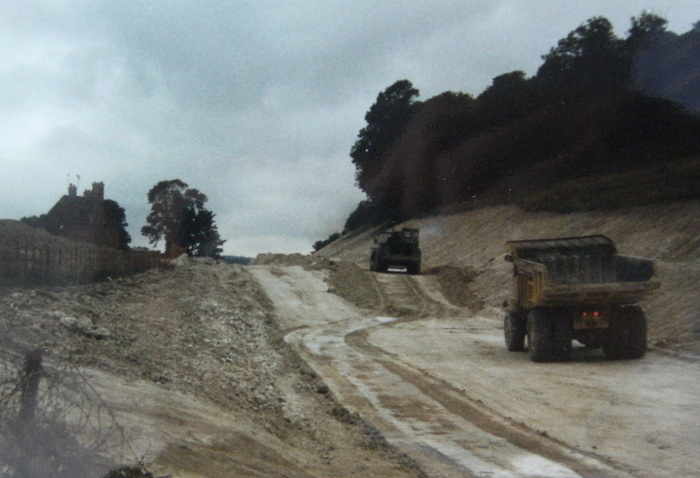 used to play cricket behind Newtown, among the cowpats, was obliterated by the road.
The new road brought peace and quiet and greater safety, but it resulted in the High Street being littered with cars, a much less lively place which it seems turned into something of a backwater.
The Warminster bypass followed later in the 1980s and by the 90s Codford, Beckington and Steeple Langford had all undergone similar changes.
The A36 still carries a large number of lorries but thankfully it has gradually lost its reputation as 'Death Valley'. Problems still remain though with the abolition of the dangerous 'dare' lane at 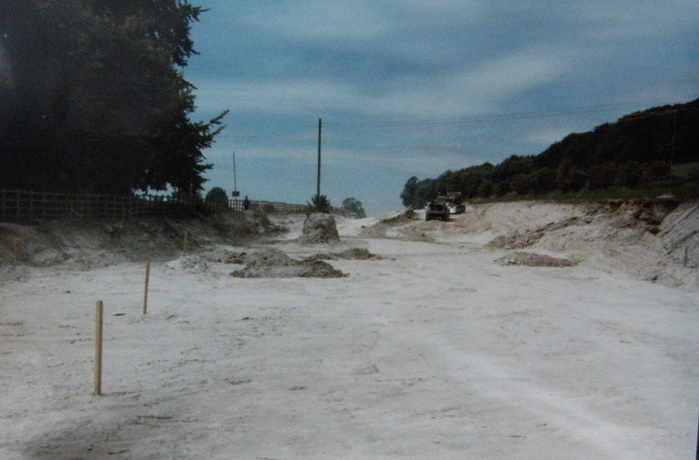 Black Dog Hill a priority and a new look at finding a solution to the stretch between Heytesbury and Codford another issue.
Of course that leaves the elephant in the room - the Salisbury Bypass. I was glad when this project was cancelled in 1997 but no doubt the time will come when a fresh look is taken and a more suitable solution comes forward.
VIEW the 1985 order in the London Gazette setting out the changes CLICK HERE
Photos captionsPic 1 - Looking west from the Knook side of the village where the path of the new road through Heytesbury Park can clearly be seen.pic 2 - Looking east from East Hill Road - this is at the junction used today.Pic 3 - Looking east from the right of way crossing near the old chicken houses. Pic 4 - Looking west from the same position - the houses on the right are in Little London.Bottom pic 5 - Looking west from the junction with East Hill Road - This is where the buses from Salisbury turn off the main road today.
Copyright S Dancey - feel free to download and use on websites but please contact us if any photo is to be used commercially.

A BUSY Friday earlier in June 2012  saw yet another fatal accident on the short stretch of highway between Knook and Codford.
The victim was a 91-year-old man residing in Upton Lovell.
The powers that be must surely now take notice and do something to try to stem this appalling loss of life on the A36 in this area. The lack of action is stunning.
I'm sure many people have contacted the MP and Highways Agency about this matter on numerous occasions, including my Vision for Warminster colleague Paul Macdonald.
Steve Dancey who gave planning permission for new road in 1991 when a member of WCC planning committee, said: "I fully realise that a new stretch of highway fit for its purpose could be many years away but in the meantime I have have ideas worthy of consideration.
"It is quite likely that speed is a factor in a number of these terrible accidents, so there needs to be an effective way of reducing speeds between Knook and the Hillside Cafe.
"Why not bring in new technology in the form of average speed monitoring along the whole length of this suspect section of highway with a view to bringing speed right down and thereby reducing the seriousness of any future accidents?
"This technology is now available and employed regularly on our motorways and although not cheap it could be deployed relatively quickly and, in my opinion, would be more effective than a single speed camera or speed activated warning device.
"There should also be a ban on all vehicles leaving the village to join the A36 at this junction.
@This part of 'Death Valley' must surely be one of the priority constituency problems and as this is a trunk road it must be a matter for  our MP.
"In the past local MPs have been listened to. In the early 1990s Robert Key was very successful in getting traffic lights installed at the A36/A303 Deptford junction following the deaths of two elderly women in an accident while on the A303 the Hawk Conservancy gap near Weyhill was closed after a number of [email protected]